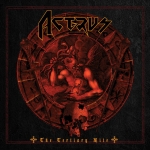 This is the third album from this total Heavy Metal project from Metal Master Daniel Corchado. It seems that sooner or later those Death and Black Metal legends will soon turn to their roots that is traditional Heavy Metal. And that can only be a good thing. In this case, this third album goes with a full line-up, and one hell of a vocalist. On the first album Roberto Valle did vocals, in a gruff / melody battle that worked well yet a bit limited. For the second album Daniel took control of everything, vocals included and he did a good work, yet it was also a bit limited in his range. But here, oh my, he got the vocals of Esteban Julian, doing a fantastic, killer performance that fits the style like Mordor to the Ring To Reign all of them. The style of the band can be related to a more Speed Metal approach in the early HELLOWEEN area, with dark melodies and really killer riffs one after the other. Yes, there is plenty of up-tempo JUDAS PRIEST and even some KING DIAMOND sound here and there. But song after song, solo after solo, scream after scream, there is that incredible riff that will stick to your headbang like zombies to the survivors. Also the production values are magnificent. Everything sounds so good. And the riffs, the goddamn riffs! You can almost feel the power, the glory, the sun burning… yes, they are melodic, epic, heavy and so emotional, that it is hard not to feel sometimes those passionate vocals in such an emotional form. No, there is no way you can skip any song when listening to this. Back in there, yes you can also feel that there is Death, Thrash and Black Metal touches, yet so subtle and so well disguised within the Heavy Metal sound that it only adds more to the sound of the band. At times the band sounds to me like ICED EARTH from the “Burnt Offering” album era. Without a doubt a serious contender for album of the year. This is the kind of music that traditional Metallers and more extreme fans alike will surrender to the great riffs. More ACERUS info you will find at www.facebook.com/thechasm.acerus, label contact: www.facebook.com/restinpeacerecordsofficial