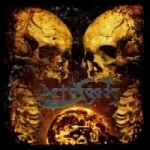 In the review of their previous effort (“Stench Of Centuries”) I predicted that, given some adjustments, ACT OF GODS could produce a monstrous album. I was no wrong. With a fleshed up line-up (a supplementary guitarist is at work here, ACT OF GODS being now a quintet) and refreshed ideas, this French death squad offer us an album gorged with fundamental and archetypal Death Metal riffs. As soon as the short intro ‘Hiatus’ (with its certain nod towards PESTILENCE ‘Parricide’) kicks off, the first thing I remarked (and by which I was floored at once) is the huge tower of sound created in the studio. In the best of my memory, I have never heard a so corrosive guitar sound, razor-sharp and crystalline, a real feast for the ears. Musically, ACT OF GODS are clearly stuck in the classic way of Death Metal song crafting, it is neither modern nor retro, simply classic (think of the 1989-1991 era of the genre), a blend of early PESTILENCE with “Altars…” era MORBID ANGEL, just to give you a faint idea. Only the improvements of recording techniques betray the actual year of conception of this album. Need I say that such a release acts like a relieving cure especially regarding the alarming mediocrity of the present days Death Metal scene? On “Maât” (from the name of the Egyptian goddess, daughter of Râ and incarnating the supreme justice) ACT OF GODS have refined their song writing, sweeping away the monotony factor I told you about in my review of their previous album. The band are always busy experimenting with angular structures, trying (and achieving in the end) to never lose the listener’s attention. Fear not, when I say experimenting, I don’t mean fancy studio tricks, the music stays what old farts like me love so much when they think of great Death Metal. Surprisingly fresh while being predictable, ACT OF GODS could even be considered as an avant-garde band because they precisely play the purest form of Death Metal, a rare feat today. I can’t end this review without praising the remarkable vocal work offered here, the essence of Death Metal itself which brings back fond memories of the old scene! The only let down of this otherwise excellent record is the cover of TERRORIZER ‘After World Obliteration’ competently executed but without the spark of madness present in the original (I hate covers anyway). But the ten other tracks make it for this little annoyance! I regard this album as an essential acquisition for serious Death Metalheads. ACT OF GODS are now the very best Death Metal outfit in activity in France (no more “among the best”!), I can’t say more! Don’t forget to visit the band website: www.act-of-gods.com.