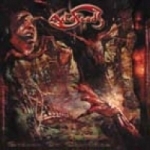 This four piece from France offer us a really enjoyable first full length. With two ex-MUTILATED members within their ranks, it is clear right from the start that they are up to play old school Death Metal which is not very frequent these days, I am sure you will agree. Musically wise, ACT OF GODS remind me of classic American bands from the beginning of the 90s, like CANNIBAL CORPSE and "Imperial Doom" – era MONSTROSITY especially (for the intricacy of the songs and the overall sound). Extremely well produced by Stéphane Buriez (of LOUDBLAST fame of course) "Stench Of Centuries" features 11 tracks (12 on the vinyl version, the extra track being a MUTILATED one), each of them being equally good. Some monotony surges after a while because all the tracks are build on the same frame, so I can’t say ACT OF GODS are a groundbreaking band in the Death Metal field. But damn, they are a shoulder above their competitor nevertheless, thanks to an excellent musicianship and the frantic conviction these guys demonstrate throughout the record. With VORKREIST and BLOODY SIGN surely the best French act in activity. And I guess that after some adjustments, the second coming of this band could be huge. Meanwhile you are advised by yours truly to give a serious listen to this one.