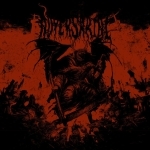 Alright, before I talk about this album, I have to clear something up. I am not a paid agent of Dark Descent Records. They don’t compensate Dick Osmond for unanimously positive reviews! Even though I do rave about many titles in their catalog, I assure you my praise is genuine. Anyway, what a goddamn sick album ADVERSARIAL have given us. This is a masterfully seamless fusion of Death and Black Metal. The drumming has a consistently pounding-style blast (best known in Death Metal bands), while the guitars make frequent use of raked Black Metal chords. Likewise, the vocals are forceful Death Metal grunts; contrasting with a very bleak and hellish musical canvas. And a word of warning to you guys who love it squeaky clean: "Death, Endless Nothing And The Black Knife Of Nihilism" is a murky record. The atmosphere is of the choking smoke in a bombed-out city. I cannot overstate myself when it comes to this album – it is highly addictive. Each successive track drags the listener further and further into darkened misanthropy. This makes bands like BELPHEGOR sound like Deathblack for middle-schoolers in fishnet shirts. Desolizating, grim, and yet insidiously catchy, ADVERSARIAL have released a contender for Death Metal Album of the year. Pure gold. More information at: www.adversarial.ca, www.facebook.com/adversarialofficial, www.darkdescentrecords.com