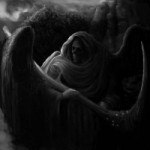 Nearly a year after their debut album, “All Idols Fall Before The Hammer”, ADVERSARIAL return with “Prophetic Plain Of Abyssal Revelation”, a 10-inch MLP (and digipak CD) reprising tracks from the 2008 “Thralls” demo, two new songs, and two cover songs of ARCHGOAT and INCANTATION respectively. So, for those of you who enjoyed “Thralls”, the A side should appeal, since it contains all of the “Thralls” tracks. The new ADVERSARIAL material lies on the B side. The title track, ‘Prophetic Plain Of Abyssal Revelation’, starts slow but blasts and angrily charges forward in short order. This is a fantastic new song, and one I fervently hope will make it onto the next ADVERSARIAL LP! They’ve tuned the snare drum down, and assuming that this MLP is any indication, they should continue with this practice because it’s definitely paid off. A too-audible snare drum was the only real complaint anyone had about “All Idols Fall Before The Hammer.” Now that ADVERSARIAL have mastered the snare, they grow ever nearer to Death Metal perfection. The second new song is called ‘Impending Eternal Blackness’ and it too strongly suggests that the hateful venom in the band is far from depleted. Once again, the reduced snare drum makes the dark, intricate guitar and bass work more discernable, and thus easier to appreciate. Lastly, the cover tracks, one of ARCHGOAT’s ‘The Light-Devouring Darkness’, and the other of INCANTATION’s ‘A Once Holy Throne’, do the original songs justice (quite a rarity for any era in music) as well as demonstrate the versatility of the musicians involved. Every Death Metal fan worth his or her salt should get their hands on this brilliant MLP before it’s too late! www.darkdescent.net