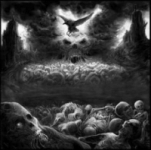 Amid the incessant onslaught of mediocre records, occasionally one may find the impetus to continue moving forward… in a sound that properly reflects the impending structural unraveling and the unveiling of images and ideas long thought incomprehensible and which truly shakes the souls of the living to their core with the magnificent grandeur of death. ADVERSARIAL capture this sound and in doing so bring unimaginable darkness to the world of the light. Astounding in the depth of its scorn for the holy, “All Idols Fall Before The Hammer” represents a new degree of power and form. This is pure, cataclysmic Death Metal; however, having emerged in this post-Black Metal era, it carries in its song structure, in its revelations of darkness and evil, in its bold image of Luciferian power, the spirit of Black Metal as well. While so much of the Death Metal being released in 2010 seems anachronistic and uninspired, ADVERSARIAL manage to firmly orient their approach in the present while channeling the classic sound of the past. The influences that are folded into their sound are sufficiently charged with an individualized touch such that the result is something intangibly unique. Evaluated under this rubric, “All Idols Fall Before The Hammer” is quite possibly the most phenomenal debut Death Metal LP since DEAD CONGREGATION’s “Graves Of The Archangels”. While ADVERSARIAL’s previous demo was exceedingly competent, this new album transcends their previous work by many orders of magnitude. It is more inspired, better recorded, and more compositionally rich than the demo and also contains more effective hooks drawing the listener deeper into the songs. ADVERSARIAL, like so many Canadian Metal bands, rely heavily upon aggressive precision with a technical approach, but without seeming mechanical. Interestingly, the band depends very little on the use of leads and solos. And the few times where leads are utilized, they are often buried in the mix adding more to the texture of the song overall. This reflects ADVERSARIAL’s preference for building megalithic compositions as opposed to merely relying upon the standard trappings of Death Metal (Interestingly, this immense sound is the product of only three musicians and they recreate the same intensity live). ADVERSARIAL also show that they have a penchant for creating transitions between parts in complex songs. Each song emerges from a collision of disparate riffs seemlessly fused together. In this way, ADVERSARIAL demonstrate incredible musicianship while never indulging in passionless and angular displays of cerebral virtuosity. Relentless, immoral sounds are channeled into a cyclone of death and hate. The anguish of living is subsumed by the violent power of death. There is little room to breathe between the beginning and end of this album. Suffocating, hostile riffs fall and rise laden with fury. ADVERSARIAL punctuate their steady onslaught with blasts of mania and episodes of infinite darkness. If there is a flaw on this album it is in the mixing of the instruments, the snare is arguably a bit too high in the mix and is occasionally distracting. I suspect that the band left nothing to accident and that, therefore, this was a conscious decision on their part. If so, I have little room to criticize because the album is phenomenal regardless of that effect. There is little doubt in my mind that this record will not only be at the top of most Death Metal fans’ album of the year lists, but will also stand the test of time and be recognized as a classic of the post-Black Metal era of Death Metal. www.myspace.com/adversarialmusic, www.darkdescent.net