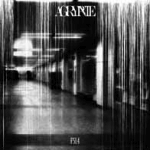 This piece of modern, melodic Black Metal is a solo project by Torsten Hirsch, known as the vocalist of the lately split up NOCTE OBDUCTA. Torsten alone is responsible for vocals, string instruments and programming of drum computer and keyboards. Only the lyrics were provided by NOCTE OBDUCTA’s Marcel Breuer. And what can I say about this project? It’s fantastic and definitely deserves to be a real band! Although this album needs some time to grow, it turns out as a musical journey through depression and anger. The long songs convey an intense melancholy which is interspersed with raging melodies; besides very distinctive guitar riffs and acoustic parts the keyboard serves for some unobtrusive background ambience. And above the strongly emotive musical performance, Torsten’s vocals circle like vultures over dead cattle. With a harsh voice he recites over despair and emotional decay in very interesting, thoughtful German lyrics, which are far away from the stereotypical lyrical standard of Black Metal. Being an impressive display of well composed, emotional music, this album is more than recommended for people who love to indulge in dark and atmospheric sounds. www.agrypnie.de.