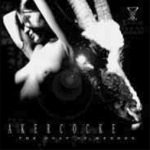 U.K.’s AKERCOCKE are crazy motherfuckers! I already listened almost a dozen times to this weird album and still I don’t know what to think about it. First of all, AKERCOCKE surely belong to the genre of brutal Death Metal in the American vein, but their music is much more varied and foremost weird! Additionally you get some Satanic Black Metal parts, dark power electronics and mesmerizing keyboard tunes, but also massive grind eruptions. So all in all I guess that AKERCOCKE is a band, which could be interesting and appealing for people into SUFFOCATION to NAPALM DEATH to even CRADLE OF FILTH! Well, this sounds probably strange, but it’s true! “Goat Of Mendes” is already the second album of these English sickos, their self-financed debut album “Rape Of The Bastard Nazarene” was already ‘album of the month’ in U.K.’s infamous Terrorizer Magazine. Personally I think, that AKERCOCKE are from time to time a bit hard to digest, but at least these guys are original and a bit innovative. Well, to sum it up, AKERCOCKE is probably one of England’s hottest exports since the mad-cow disease and the foot-and-mouth outbreaks.