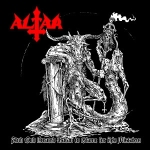 ALTAR
And God Created Satan To Blame For His Mistakes
(Vic Records)
59:33min

The first strike of ALTAR, 1992’s “…And God Created Satan To Blame For His Mistakes” demo tape, is an often overlooked gem that was never re-issued formally until very recently. Vic Records have re-issued a CD version of the original demo tape, remastered, with additional bonus content that gives an interesting insight on how ALTAR closed the gap from their first demo to the lauded 1994 LP “Youth Against Christ”. Initially released in the early 1990s, ALTAR were in the fold of the Netherlands Death Metal community alongside groups such as THANATOS, PESTILENCE and ASPHYX, many of those bands in the midst of writing their legacy material during this era. ALTAR stood out as a band that played various stages of bursting, rapid-fire Death Metal in the vein of VADER and DEICIDE accented by mid-tempo chord-heavy Doom / Death more akin to early INTERNAL BLEEDING, BAPHOMET or CIANIDE. As a demo, “…And God Created Satan To Blame For His Mistakes” was a resounding musical attack and a huge entry into both the Netherlands scene and the global scene. Opening with ‘Throne Of Fire’, ALTAR show off a stylistic approach to phrasal Death Metal. Aggressive blast beats push tonally dense guitar riffs forward, utilizing tactics such as tension and release, fast breaks and changes, and heavily emphasized downbeats to add character and detail to the song. The lack of a substantial tonal center helps created a sense of chaos and panic amongst the songwriting. Melodicism, while not a huge factor, makes an appearance through a tremolo-picked single note passage through the chorus. ‘Forced Imprudence’ takes a much slower approach compared to the frontal ‘Throne Of Fire’. While not as breakneck as ‘Throne Of Fire’, ‘Forced Imprudence’ distinguishes itself as very much driven by Edwin Kelder’s vocals. Speed and intensity gradually increases throughout the song, but the slower introduction passage allows the listener to clearly hear everything, from the metallic, plucked tone of the bass to Kelder’s animalistic vocals. ‘Psycho Damn’ employs a mid-tempo pace throughout the song with minimalist melodic intervals buried between palm-muted open notes coming off the guitars. A typical technique in Death Metal but just like certain guitar tones will forever be married to Swedish Death Metal or absurdly harsh production to early Scandinavian Black Metal, this style of riffing is characteristically “Netherlands” in tone and delivery. Closing with ‘Cross The Bridge Of False Prophecies / Dismantling the God’, over eight minutes in length, ALTAR close their initial demo with a powerful display that summarizes the better qualities of the three previous songs in one final stand. The production is excellent, especially for an early 90s demo. The original version prior to the Vic Records remaster was perfectly competent to deliver this particular style of Death Metal, the remaster job sacrifices none of the songs power or tonal range, it just simply clears up some of the more rougher edges in the sound and boosts the volume. Guitars are loud and clear, the bass is not forced out of the mix, and the drums are placed well. The bonus re-issue material comes in the form of a live set from Rotterdam, recorded in 1993. All of the songs from the demo are present and accounted for during this live set, giving a glimpse into ALTAR’s early live days. A re-issue for “…And God Created Satan To Blame For His Mistakes”, was long overdue. Vic Records delivered on the initial remaster and the bonus live content, and can be reached at www.vicrecords.com. ALTAR can be found at www.facebook.com/altardominion.