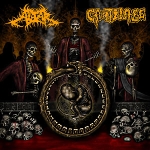 This re-release is what I would call value for money, a double CD, more than two hours of Death Metal, two old Scandinavian bands, two albums and five demos as bonus. Well done Xtreem! I’m totally happy that so many labels are digging old and forgotten jewels and bring them back to attention. But unfortunately sometimes there is a reason that some forgotten underground bands did not become the next MORBID ANGEL. Sometimes the band is just okay, nothing more and nothing less. ALTAR (Swe) and CARTILAGE (Fin) are two bands which fit exactly into this category. I know that both bands are often considered as cult or this split as an overlooked and forgotten masterpiece. But I don’t see it that way; I own the original version from 1992 of this split and rarely listened to it through the years. And when I did, neither ALTAR nor CARTILAGE convinced me. Both bands are okay, they are not bad and they are not really good. You won’t get hurt while listening to this split but on the other hand you either won’t go crazy while listing to these recordings. It’s just simple structured, mostly mid paced, early 90s Swedish Death Metal (without that typical Sunlight sound) with some US Death Metal influences on disc one and just simple structured, mostly mid paced, early 90s Finnish Death Metal with some US Death Metal influences on disc two. No more, no less. The production of both discs (including the demo recordings) is good. Don’t get me wrong, as mentioned before both bands deliver blameless Death Metal and I really recommend you to buy this re-release but mostly for historical reasons. So don’t expect something extraordinary here. www.xtreemmusic.com