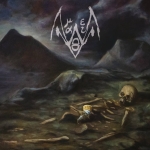 Nowadays, the speeches of lamentations, in every subdivision of the anthropoid thinking, are made off with double morality, different forms of utopia and the misconception of human convictions. Having as a result, the de-evolution of societies that emerge to keep on carving their own end. A spittle for their ancestors. AMALTHEIA is a band that was formed in 2019, and since their origin, they have been spreading in Black Metal the asseveration written above. AMALTHEIA consists of 4 English men and one Greek drummer. There is not too much information about this horde (besides, that one of the members has a project called SEA MOSQUITO – an atmospheric Black Metal / Noise / Industrial conception). They made an independent 2 songs demo in 2019 and just released their first full-length through Polish Godz Ov War Productions. The name of this creation is the homologous for the band’s name. “Amaltheia” consists of 6 hymns, whose titles and lyrics are influenced by the Greek mythology, focusing on the breeding of Zeus by his foster mother and the chaos of existence. The album starts with ‘Pyre’, a song that goes from a strong melody to dissonant choirs, drums and riffs that provoques the desire of discovering more and more unspoken tones. A suitable incarnation to start the album, as a concept and as a whole. Seeing the logo and the cover art (made by Greek artist Maximos Manolis) only produces fascination. There is a lot of thinking and production behind this. From what I understood about the lyrics, they consist of raping the millenary believes of human being. ‘Dominion’ follows this piece of art, not going too far from the notion of the sonorous beginning, with the use of deep vocals. At the middle of “Amaltheia”, ‘Dawn’ appears with a great timing for every instrument, having an ambient essence with long and well structured compositions. An auditive construction that lets the song develope its own changes. The vocals have their presence at the correct moments, letting the instruments make the story. The liberation of the dawn. ‘Threnody’ is the best example of how a speech of lamentation has to be made, keeping a well conceived premise of a musical biography for the King of the Gods. The drums and riffs, from the first couple of minutes, are ideal to take the path to the dissonant and Avant-Garde music, even in some parts of this song, they show some influence from GRAVE MIASMA. The obscurity and putrid vocals emerge also in ‘Fall’. This composition, for me, is the reason of the existence of “Amaltheia”. In the last minutes of it, the greatness appears. There is a narrative voice that sounds as if it was part of a movie, dialogue or catharsis and explains everything. The understanding of their whole album, materializes here. After this, ‘Oblivion’ finalizes the full-length, achieving an unique production and not a meaningless Black Metal album. Those that abound and only give me hangovers. If you are into bands like THANTIFAXATH, SKÁPHE, EPITAPHE, MARTRÖD and DEATHSPELL OMEGA, listen to AMALTHEIA. With this release, in my absurd thinking, I put Godz Ov War as the best Black Metal label in the contemporaneity time and AMALTHEIA as a band that needs to receive the recognition that they deserve. More info at: www.facebook.com/amaltheia.bm, www.facebook.com/godzovwar