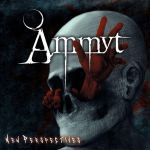 After Jon Nodtveidt’s death in 2006, DISSECTION disbanded and left a huge hole in their form of Black / Death Metal. No one could touch this band previously, though bands like THULCANDRA certainly picked up where DISSECTION left off (not to forget THE SPIRIT – Frank). AMMYT, however, has pretty much accomplished the same thing. And why not? The Metal world needs this sound in its life. ‘The Horror Of Habit (Prelude)’ opens their second full-length “New Perspectives” with an intro that bleeds into ‘Phobia’ which makes it abundantly clear the band’s been listening to a lot of DISSECTION. The vocals, guitars, drums and even production pay a huge tribute to the influential band. And you know what? That’s just fine with me. ‘As Leaves Turn Red’ includes a fairly straight forward riff and low vocals. The band’s confident in their sound and seem to make no apologies for continuing the influence. ‘Dreamcatcher’ is a fairly mid-tempo track as ‘Valkyr’ creates a ruckus with its upbeat guitars and drums that pound with the fury of a cackling behemoth. ‘Stranded’ mixes a battle-type vibe with epic and melodic rhythms that reach skyward in their power. ‘Mask In The Mirror’ , for the most part, is slowed down a bit compared to other tracks. ‘To Reach The Shore’ sounds like a cross between IRON MAIDEN’s galloping guitars and MYTHOTIN’s rowdiness. ‘City Of Memories’ sort of rises from the gutters as ‘No Time To Waste’ is simply an anthemic track. The final song ‘To Reach The Shore’ is a different version than earlier on the album. Whether comparisons to DISSECTION are welcome or not, the album is what it is. And that’s a damn good thing. We all miss DISSECTION. But at least we have a band to keep the torch lit while also putting their own touch to the sound we crave. For more information, check out www.facebook.com/ammyt.band, www.stf-records.de