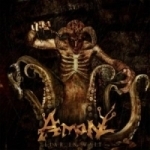 So, as some facts go the Hoffman brothers – Eric and Brian, left DEICIDE in 2004, after a decent sounding "Scars Of The Crucifix" album. The Hoffman duo got much credit for themselves due to the monstrous riff fests that some of DEICIDE’s earliest recordings were pretty much full of – especially the band’s two so-called landmark releases; 1992 album "Legion" and "Once Upon The Cross", that was released 3 years after "Legion", in 1995 precisely. In 2007, however, the Hoffman bros adopted the AMON name back for themselves, and started making new AMON stuff under that moniker. To complete the AMON line-up of 2012 Anno Satanas, Jechael (on bass and vocals) and Mike Petrak (on drums) – both ex-members of SUCCESS WILL WRITE APOCALYPSE ACROSS THE SKY, soon teamed up with Eric and Brian – and the killing began. "Liar In Wait", AMON’s 9-track debut album (not counting the "Amon: Feasting The Beast" album on this because it contained pre-DEICIDE demos when the band was originally called AMON), is – to say it as straight and honestly possible, kind of a ‘meat & potatoes’ release that you somehow even expected to hear from these lads in the first place. There’s nothing surprising or groundbreaking on this release that would blow your ass off on the kitchen floor by sheer amazement. However, don’t read me wrong either because sometimes – on very rare occasions though, this ‘meat & potatoes’ thing can even do that much needed trick – and open those a few necessary closed doors for you that allow you to digest the offered meal with enough pleasure, letting a good enough aftertaste in your mouth. "Liar In Wait" is the kind of record. All the songs on it, have been well-crafted from start to finish – possessing enough of this punishment factor and flagging bravely for the name of this known Florida Death Metal sound for the most part of it and whatnot, also reminding all of us of the Hoffman bros’ ex-band every now and then, which shouldn’t be that surprising after all. Besides, we all do know what both Brian and Eric are capable of doing when the guys are in the right songwriting mood. Listening to "Liar In Wait", makes you realize that the guys have been in that right mood, to get just enough some kick-ass value for their songs on this record. Of course it’s nothing new what they offer on "Liar In Wait" but it’s still all good stuff nevertheless. Their deep roots for that Florida Death Metal sound are strongly present through the entire album, and if you have just ever loved that sound, nothing will stop you liking this record either. Most importantly, AMON do deliver. It’s even pretty fair to state the guys’ 2nd coming under the infamous AMON name, is well justified because they do exactly that what their fans expect them to do. So, are you in the need of some good ‘n old AMON stuff perhaps? Then by all means get some for yourself at: www.amon.mobi