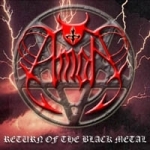 Some of our readers are certainly familiar with this band already, which was called AMON GOETH for a brief period of its history. With this new album (with a new line-up, following a troubled time when two of the band members were killed in a car accident), these Czech warriors were better to deliver the goods, considering the title they have chosen. Let’s say that AMON take the meaning of the "Black Metal" concept in its 80s acceptance, when the sub-genres of the most extreme Metal were not rigidified yet. That means that on this album you will find a great mix between primitive MORBID ANGEL, raw SLAYER (when they were an unreal band) and naïve German Thrash. It is as promising as it sounds; the album contains at least one exceptional song, namely ‘Beltebor’, and when I am saying exceptional, believe me, it is! This is the kind of track one can listen to again and again, like it was the case a long time ago. Expect a dark Thrash assault with this one! This is not to say that the rest of the album should be ignored. In fact, the more I listen to it, the more I find it pretty enjoyable and the more I find new details to relish on! I can’t say that of the majority of the albums issued today. I can tag the overall production of the album as a vintage one, the quality of the sound doesn’t take over the quality of the compositions. The guitar buzzes like a monstrous insect, the voice stay in the deep shriek mode (I mean that no insane high screams are to be heard in favour of the power of the vocal delivery), dubbed sometimes by low growls. AMON show ability to vary the rhythms enough to guarantee that each song sounds different. All the lyrics are in Czech, like it is the case with the vast majority of the Czech bands, but you can’t tell at first so much the intensity of the music hides this fact. To sum it up: a band no one interested by great heartfelt Metal should miss. Maybe you couldn’t find the AMON’s name spread all over in glossy paper magazines, but you will be rewarded ten times the effort to dig a little deeper down to exhume this gem! A great album by a great band! Check AMON’s website at: http://sweb.cz/amon.metal/index.htm.