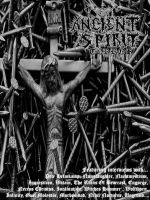 It took editors Stefan and Vasili quite a while this time to accomplish issue number 3 of their unholy rag, but after I’ve seen the result now I must say it was definitely worth the wait! Luckily the whole concept of covering blasphemous Black and Death Metal acts exclusively wasn’t changed at all, which results in the fact that I often feel reminded on the far more exciting days of the underground when fanzines still inspired me to contact bands that I wasn’t aware of before. Layout wise it’s ok, yet improvements are possible here and there. The printing quality for instance is still a bid muddy and I personally would also go for an alphabetical order of the reviews, because it’s quite difficult to find a certain band when 147 CDs, demos and vinyls get a mention… Setting the text into columns (instead of simply writing from left to right on each page) would make it look more exciting as well and the exclusive use of capital letters in some interview answers should be avoided completely in the future. What I really appreciate though is the fact that they decided to switch from the German to the English language, which means the entire underground scene is finally able to enjoy this big fat monster of a zine. Content-wise the main focus of ANCIENT SPIRIT TERROR is still Black Metal (with some cool Death Metal thrown in as well), resulting in no less than 31 interviews with the following unholy forces of evil: ARCHGOAT, INQUISITION, PETE HELMKAMP, ETERNITY, MORBOSIDAD, EMBALMED, INCANTATION, WITCHES HAMMER, GOAT MOLESTÖR, ENGORGE, ABAZAGORATH, CHARON, NUNSLAUGHTER, DIVINE EVE, PYRE, NIHIL NOCTURNE, VARATHRON, NECROS CHRISTOS, GOREAPHOBIA, INFINITY, WATAIN, THE RUINS OF BEVERAST, BLOOD VENGEANCE, NACHTMYSTIUM, LJA, PRIMORDIAL, TO SCALE THE THRONE, PARIA, WOLFTHORN, URGRUND and MANTICORE. All those of you who already own issue 1 & 2 will go for # 3 right away anyway, and everyone else (especially all our foreign readers) are advised to check it out as well! Really one of the last extremely dedicated and totally true underground zines around… It sells for 5,-Euro (+ 1,45 Euro postage within Germany) at the following address: Vasili Vasilopoulus, Postfach 104108, 44041 Dortmund, Germany, email: ancientspiritterror@yahoo.de. For orders outside of Germany contact Vasili for individual postage rates.