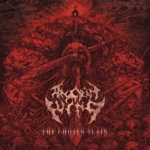 ANCIENT WIND
The Chosen Slain
(To the Head Records)
47:30min

While listening to the first tunes of ANCIENT WIND, I would have expected another band from Scandinavia, but not really from the United States. But Black Metal and especially the Scandinavian sourced bastard between Heavy Metal and Black Metal is still quite popular in the States and some bands like BANE or ANCIENT WIND still worship this sound. For me, it is a bit difficult to stay objective, as this was the sound, which heavily has shaped my musical taste in the mid 90s. ANCIENT WIND plays blackend Death Metal, influenced by outfits like AMON AMARTH, DISSECTION and ABLAZE MY SORROW. What is different to mighty DISSECTION is the fact, that they proceed in a far more melodic way, very much influenced by classic Heavy Metal stuff of the 80s like MAIDEN or SAXON. Some of the riffs and guitar solos easily could have fitted on some of the classic SAXON albums. Also a lot of 80s Speed and Thrash Metal has found its way into their sound. Their concept is less evil and satanic, but more guitar orientated and their own chosen style Blackend Battle Metal fits well. Even some influences of Viking Metal can be found in form of male choirs completing the typical Death / Black vocals of vocalist Roberto. The production is clear and spreads around some 90s magic. The drumming is fast and powerful and completes their old school sound. The only weak point is, that they are nearly twenty years late with their sound, as back in the days, lables like No Fashion and Wrong Again would have loved to sign them and nowadays only a few people care for this sound. If you expect any new inventions, ANCIENT WIND is not the right band for you. But if you still like this sub-genre and want to listen to a solid album with eight strong tracks worshipping the good old Gothenburg style, check the band out via: www.facebook.com/ancientwind, http://ancientwind.bandcamp.com, www.totheheadrecords.com