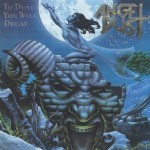 ANGEL DUST
To Dust You Will Decay
(No Remorse Records)
62:46min

Here we have the remastered reissue of the second album by the German Speed Metal band ANGEL DUST. If you’re familiar with the melodic Power Metal they played since the first post-reunion album, "Border Of Reality", you should have to know that they had a very different style during the 80s. In fact, "To Dust You Will Decay" has been the excellent follow-up of the more than good debut full-length "Into The Dark Past" from 1986. It has been released in 1988, after which they disbanded at the beginning of 1990. Without to narrate all their biography, it’s at least necessary to remember that they have had a important line-up change on this album: Vinni Lynn and Stefan K. Nauer replaced Romme Keymer and Andreas Lohrum on guitars, and, at the same time, S.L. Coe took the role of the singer, beforehand assigned to Keymer. The new guitarists surely lent a clearer, more powerful and technical performance with their instruments, Coe instead was the element who was missed on the previous album, a great singer able to combine progressive metrics, epic melodies and catchy choruses. In this sense, I could compare the switch behind the microphone from Kai Hansen to Michael Kiske if we watch what happened in HELLOWEEN, that, with their memorable "Walls Of Jericho" has been undoubtedly a big influence for ANGEL DUST. Anyway, going back, "To Dust You Will Decay" is the dominant approach of this band for what they symbolized during the golden years of the German Speed / Tthrash Metal scene. They did music of the same quality of giants as early BLIND GUARDIAN or RUNNING WILD, but they weren’t lucky enough to get the same attention and success. If the songwriting on "Into The Dark Past" was mainly oriented on aggression and speed since the beginning, "To Dust You Will Decay" was formed by tracks like ‘Mr. Inferno’, ‘Wings Of An Angel’, ‘Into The Dark Part (Chapter II)’, and ‘Stranger’ that traced the sound of the German Heavy / Speed / Power from its inner tradition, and by other ones, namely ‘The King’ or the title-track, where the style is pure Thrash Metal. But all the eight songs are enjoyable, well written and performed; moreover, everything is usable as best you can thanks to a perfect production. There are also five bonus tracks on this reissue, the instrumental ‘Flight To Russia’, another song called ‘Dawn Of The End’ (probably discarded from the same recording session) and three rehearsal tracks.This is a great classic of German Metal, fundamental in your collections if you’re fans of those bands I just mentioned, but also of IRON ANGEL, PARADOX or, to talk of some American examples, ICED EARTH or FLOTSAM & JETSAM. Thanks to No Remorse Records, you can avoid to pay a lot of money to get the original version of this album, who offer it on CD or LP, so check their website at: www.noremorse.gr.