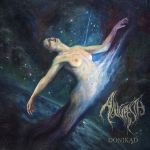 Two and half years after their great debut EP “Znikąd”, the Polish Black Metal act with the strange name is finally back with their first full length. Again, Godz Ov War Productions is responsible for the first album from ANGRRSTH. The four piece from Toruń baptised this one “Donikąd”, which picks up the title of the EP. While “Znikąd” means “From Nowhere”, “Donikąd” translates as “Into Nowhere”. And it’s not just the referring titles, it’s also the musical direction that is a straight continuation from the EP: Black Metal with a lot of atmosphere and diversified songwriting that transports a lot of feeling and dark emotions. ANGRRSTH even notched up their performance and delivered a great Black Metal album that combines the old with the new school in a fantastic way. The opening ‘Ciało Me Wyklęte’ (‘My Cursed Body’) already shows all the fascinating facets of the sound of ANGRRSTH. And the other six songs are as great, be it the rather long and more complex ‘Niebiański Pogrzeb’ (‘Heavenly Funeral’), the blasting attack ‘A Czego Tu Się Bać?’ (‘And What Is There To Be Afraid Of?’) or the a little bit epic ‘Niebyt Zmyślony’ (translates roughly as ‘Not To Think’). And with the final ‘Ostatni Akt’ (which fittingly means: ‘The Final Act’) ends a great album that needs an instant re-spin. ANGRRSTH breathe a similar spirit than their country mates MGŁA and are on a good way to become the pretenders to the Polish Black Metal throne. Check them out at www.facebook.com/angrrsth or visit their label: www.facebook.com/godzovwar