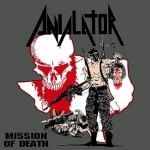 It seems that meanwhile nearly any US Thrash Metal band who released a few songs in the 1980s get the honour of a re-release. And I’m still pretty sure that not all of them are really essential. Like in the case of Texan Thrashers ANIALATOR. The band was around from 1986 to 1989 and released their stuff on the infamous Wild Rags Records label. That label was not necessarily famous for quality recordings, even though they put out some fine stuff as well. But especially in the late 1980s, any Thrash band from the US that couldn’t get a deal was signed by Wild Rags who released one or two EPs of the band before they broke up. ANIALATOR is a perfect example for these label politics. A demo tape and two 12” mini albums, all of them self-titled, are listed in the discography of ANIALATOR before they disappeared. Time and dust buried them with good reason, since the songs they released were far away from being best quality. Their demo tape from 1987 suffered from a sound that was… let’s call it… maybe a little too unpolished. Asides from that, the songs were not really original or even unique. It was obvious that ANIALATOR learned their lessons and most of their guitar riffs from SLAYER, DESTRUCTION and OVERKILL. Most of the songs from that demo were re-recorded for the first EP “Anialator” from 1988 in a good sound. Well, “good” maybe is a too strong word, since the bass on these recordings was just vaguely perceptible. But the guitars had a pretty crunchy sound and the nasty vocals of Marc Arispe (R.I.P.) were the highlight of the whole EP. A year later, ANIALATOR released a second EP that featured three new studio recordings and two live recordings of songs from the first EP. With singer Marc Arispe, the last bit of originality left the band and the vocals of guitar player Mark Olivo were like the new songs: more tamed and absolutely exchangeable. In addition the sound was absolutely lame and toothless, this time the drums were forgotten in the mix. And the two live recordings finally proved the fact that the departure of Marc Arispe sounded the death knell for ANIALATOR. It is no wonder that ANIALATOR passed me by in their time of existence, and more than 25 years later I found out that the only thing I missed was just another Thrash band. I’m very sure since I listened to the CD “Mission Of Death” (named after a song that can be found three times on it). It was released recently on Xtreem Music and compiled all recordings of ANIALATOR along with three songs from an unreleased demo the band recorded just before splitting up in 1990. Maybe these recordings were already made after ANIALATOR changed their name to become SUFFERANCE (nope, it was shortly before that – Frank), but I’m not sure. It doesn’t matter much anyway, since the songs from the demo aren’t much of a glorious chapter, too uninspired to remember them. Summarizing the career of ANIALATOR, it can be stated that they got a deal too soon, signed to a dubious company and lost their only hope of a trademark after the first EP. Maybe Mark Olivo drew the same conclusion, since I read that he started ANIALATOR anew two years ago, but with no new releases yet. In case you’re interested, visit: www.facebook.com/anialatortx or check their label: www.xtreemmusic.com