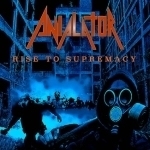 Since I’m a sucker for old Wild Rags bands like the godly RECIPIENTS OF DEATH or the mighty NECROPHAGIA (California), I wanted to give those lads from ANIALATOR, who also released some EPs on that nice label back in the day, a chance to see what they are up to nowadays. I usually don’t judge a book by its cover, “Rise To Supremacy” however truly delivers what it shows up front. The record has a very modern and partly groovy / Hardcore-ish feel to it. Unfortunately this is actually something quite common when seeing rather obscure American late 80s Death / Thrash bands doing new stuff. MORBID SAINT would be an example for that as well, who nowadays also have this shorts wearing seemingly modern Hardcore rooted frontman. So when diving into “Rise To Supremacy” it has first and foremost to be said that the production is very digital and overly compressed sounding. Some people probably like this kinda style of production but I unfortunately am not your guy when it comes to that. When it comes to the music itself its actually safe to say that the songs aren’t bad or anything (except for the modern SEPULTURA groove part in ‘All Systems Down’), it’s just the way they sound. There are no mindblowing arrangements or riffs involved but it’s still quite violent stuff like for example the intro-riff of ‘Black’. What however is a real problem for me are the vocals. They sound so fucking strained that I just couldn’t enjoy this EP. If you consider yourself a regular visitor of this website you’ll probably feel the same way, if not then it’s best to give it a try and see what happens. Information can be found via www.facebook.com/anialatortx and www.xtreemmusic.com.