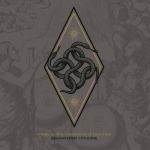 The open secret of communication is not only about what you speak out or express, but also about how it could be understood. And if anyone not in the slightest wants to listen to this album because the cover reminds of a swastika, I have full understanding for that opinion. Since I do not think ANIMUS MORTIS is a NSBM outfit (otherwise this review would not have been written) it is from my point of view just a stupid cover. It is simply too inviting for misunderstandings. Even more because the live album was recorded 2015 in Chile when ANIMUS MORTIS played as opener for NARGAROTH, an outfit which always was, or still is, a source of controversial and complex discussions. But enough of that, I believe everyone is clever enough to make up his / her own opinion. While Chile is most known in Europe for the seething Death Metal scene, ANIMUS MORTIS are one of the leading Black Metal acts of the country. The current release serves as a 16 years anniversary release, eight tracks recorded live in 2015 in Santiago de Chile and one in 2017 at the Carpathian Alliance Open Air in the Ukraine, where they shared the stage with acts like HATE, AURA NOIR and others. The nine tracks reveal the magic and fascination of ANIMUS MORTIS. Because the band is able unleash music ranging from archaic Black Metal up to progressive, even post Black Metal areas. At some moments, due to the shimmering guitars, the massive wall of drums and the echoing, nearly clean vocals the music can be described as a deep bow before “De Mysteriis Dom Sathanas” by MAYHEM, but there is more to discover. Names like DEATHSPELL OMEGA, XASTHUR, NAGELFAR or URFAUST came to my mind. The music is performed very dynamically, at every moment the band is nothing but a kick in the ass. Regarding the performance, which is tight as hell, ANIMUS MORTIS do not need to hide behind bigger names like BEHEMOTH, especially since there are some Death Metal moments here and there. “Exhibitions Of Devotion” is a seldom moment when a live album is simply better than the studio albums. So just in case you are not familiar with the work of ANIMUS MORTUS, this release is a perfect opportunity to change the situation. More information here www.facebook.com/animusmortisofficial and here www.facebook.com/ibdc666