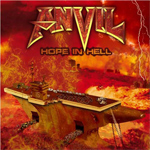 Have you ever heard the saying: "You can’t keep a good band down"? I’m pretty sure those who invented it must have thought of ANVIL. They are around for a felt eternity right now. I remember playing their debut album "Hard’N’Heavy" for the first time on my shitty record player when I was a kid, I think I was not older than 13. So that’s thirty years ago now! After I heard the follow-up "Metal On Metal", I definitely was their fan then. After the even more brilliant "Forged In Fire", whose title track was covered several times even by bands like BENEDICTION, I somehow lost their trace for quite a while due to the fact that it took ANVIL a few years to be back and the Speed and Thrash Metal wave they heavily influenced nearly swept them away. But giving up was never a real option for drummer Robb and his partner in crime, the singing and guitar shredding character type Lips. So the mid of the 1990s saw ANVIL’s second spring with good albums like "Plugged In Permanent" and great shows at Wacken Open Air for example. I remember a show in Bremen when they supported OVERKILL and nearly outacted the headliner with a brilliant set filled with old classics. In the new millennium it became a little quiet around ANVIL again, until a movie about the band and the friendship between Robb and Lips gave them a little bit more of the attention they deserve. After their 2011 album "Juggernaut Of Justice" they suffered another loss when long time bass player Glenn Five left the band after 16 years. But again ANVIL had an ace up their sleeves and pulled a rabbit out of their hats. The rabbit’s name is Sal Italiano and some (well, maybe only few) of you might remember him for playing bass in the underrated Power Metal band CITIES in the mid 1980s under the name Sal Mayn. So here I am, at least thirty years after my first contact with ANVIL, and feel like an old geezer reviewing an album by guys who are old geezers as well. And these "old geezers" are still doing well. "Hope In Hell" is their fifteenth album only and it shows a bunch of veterans in their at least third spring. The opening title track is a heavy, stomping track that stands in the tradition of other title tracks like ‘Metal On Metal’ or ‘Forged In Fire’. Then ANVIL pick up speed with ‘Eat Your Words’, a typical speedier anthem. Soon you’ll find out that Lips and company reflect on their strengths and the trademarks of their career. We get all the power food we want in the typical ANVIL style. I’m pretty sure they can’t play anything else. Neither they want to. That’s the way I like it and of course want it. There even are those ‘Badass Rock N Roll’-songs like the song of the same name and the speedier, not-so-serious bouncer ‘Shut The Fuck Up’. One of my faves on "Hope In Hell" is ‘The Fight Is Never Won’, a fast one with a surprisingly melodic and slow break that leads into an epic chorus. And there is the snappy ‘Flying’, a song about touring the world, that always makes me smile. A song to save the day for sure. Let me just mention that the digipak CD will feature two bonus songs (‘Hard Wired’ and ‘Fire At Will’), which can’t completely keep the level of the "normal" album, even though they ain’t that bad. But that’s not a stain here, for the "normal" album really rocks your home like in the good old times of ANVIL. ‘Time Shows No Mercy’ they said in one of the songs on "Hope In Hell". They might be right, but time really is merciful to them. And so I can only quote the band here: "Never break it, it will never bend. The ANVIL was forged in fire". If you haven’t ever, check: www.anvilmetal.com, www.facebook.com/anvilmetal. Or visit their label: www.spv.de