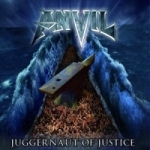 Return… the resurrection… re-awakening the pride… all these words and more can be used to define why right now in 2011 there is a review of this band. In this case, someone had the idea of doing a documental about a Heavy Metal band that could have been a gargantuan monster just to find out decades later they are a smaller creature, but one of those from where greater beasts evolved. This idea turned out to be probably amongst the best human tales of courage, honor and dedication, no matter it was about a Heavy Metal band. Enter ANVIL. By watching the fascinating history presented then, one can make out that of all things, it was just bad luck that prevented them to be what they were destined to be in an alternate world where justice prevails. They had the name, the image, and even the songs. And I have never counted the fact they were Canadians as a reason for them not going bigger. No, that was not a reason. As with their land mates EXCITER (another band I thought was going to be huge) a combination of events ended up on some of the later albums became filled with material which was supposed to gain them more fans, but ended up doing the opposite way. This lapse of reason, betraying their early ideas, proved on most cases to be a ticket to doom. And a few ones that were able to survive had no other choice but to return to their early sound…but most of them failed in a miserable way. And for the last two albums I also thought ANVIL was heading that way. But this new album, for some reason, proved me wrong. And, for once, I am satisfied with it. ANVIL is still ANVIL. Yes, they have used the modern technology wonders to have a full guitar-driven album, Lips voice is still strong (but without doubt shows age), and they still remain a more simple-rhythm orientated band. Although many people like to categorize ANVIL in the Speed or Thrash Metal spectrum, to my ears they have always been a pure Metal band, just a bit heavier and at times faster, but most of the time, mid-tempo is the name of the game. As with many bands having a second air I was expecting many fillers on the record, but to my surprise, there is actually not a song that can be described as that. At the end of the day, this is a very competent Heavy Metal album. And maybe, one of their most consistent as a full length, as I always thought ANVIL was a band that had a few killer songs on their records and the others were almost fillers. Still, there are many other bands which do it better, including newer ones. But for some mystical reason, this album sounds bigger, stronger and better once watching the aforementioned documentary. I just think that looking them in such a human form bares their soul, which makes their music more powerful than ever. In my book, after listening to so many comebacks, reunions, and long-running bands, this one has that touch and essence that was burning so strong in the 80s and very few are able to conjure nowadays. www.anvilmetal.com, www.myspace.com/anvilmetal