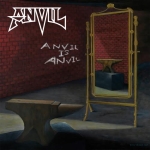 If one day ANVIL will stop to play, it will mean we should start to worry about the future of Heavy Metal. Because trends come and go, young bands often do 2-3 albums and then disappear, because they either have no strength or energy to continue, or the reality of the so called Metal business dissapoints them so much, that they don’t want to continue. And we all realize that major bands we all love won’t play forever. But ANVIL is always there. They are part of the history, and no matter how bad it is, and how many people bash traditional / classic Metal as something outdated and not trendy (big FU to them, just by the way), ANVIL is doing their thing. Sure, they had better and worse albums, some of them became classics, and some of them didn’t. But each ANVIL album is absolutely honest, you know that every single sound you hear was played straight from the heart, and each of their albums is like a manifest: "We are ANVIL, and we play Heavy Metal" (yes, you guessed it right, I’m paraphrasing Lemmy here). And it’s the same with their newest full length release, "Anvil Is Anvil". When you think about it, this title actually makes sense, because they did it again: they recorded another honest album, they did their thing. Is it good, is it better than their last few albums? Well, I had big smile on my face after the first 60 seconds of the opening track, as the album sounds fresh, strong, and very dynamic, and looks like they saved some of their best riffs and melodies for it! It’s surely different than their albums from the early ’80s, and if I would have to compare it to other titles from their catalog, I would probably locate it somewhere between "This Is Thirteen" and "Juggernaut Of Justice". Of course haters gonna hate, and will be saying that ANVIL sucks (probably without even bothering to listen to this album). But the question is: do you like pure, classic Metal played straight from the heart? Do you like good songs with good melodies, and refrains that will stay in your head? If yes, then buy this album and support the band, because ANVIL are the real deal, and "Anvil Is Anvil" is great! More information: www.facebook.com/anvilmetal, www.spv.de