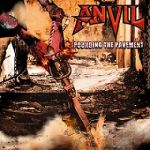 Let me just throw this out in the open. It’s no secret. Since 1981, ANVIL has seen their share of ups and downs, struggles, disappointments and albums that fell to the wayside. Anyone who’s seen "ANVIL: The Story Of ANVIL" has witnessed the Thrash / Heavy / Power Metal band playing to audiences of about five fans. From mediocre album covers to lousy production, ANVIL has had a somewhat cloudy career. But you know what? Goddammit if this band hasn’t released 17 albums, the newest entitled "Pounding The Pavement". And goddammit if they aren’t fucking entertaining as hell. They persevere, they move on, and they’ve achieved their worth of success. No other band I can think of can consistently deliver album after album, tour after tour because they love what they do. It’s their life. It’s also the life of their diehard fans. Steve ‘Lips’ Kudlow and Robb Reiner (not to be confused with Rob Reiner from SPINAL TAP fame, though both bands can easily relate to each other) are troopers in their genre. Their seventeenth studio album "Pounding The Pavement" delivers the ANVIL sound we all are used to. ‘Bitch In the Box’ is 80s Metal at its finest, though mid-tempo throughout. And is it just me or does Lips sound awfully similar to Lemmy as the years progress? ‘Ego’ is pure Thrash with a biker bar vibe. And ‘Do What I Want’ sums up ANVIL’s career in one simple lyric…" I’m just doin’ what I want… until I’m gone." And God love’em for that. No sell outs. No pandering to the audience for radio-friendly tunes. Just solid Metal the way we like it. You can almost see Lips smiling as you listen to the album. ‘Smash Your Face’ is the angry side of ANVIL that shows up just enough to show they’re not all goofy anthems and shenanigans. We all remember Steve playing his guitar with a dildo. The thudding, chugging ‘Pounding The Pavement’ is a boisterous instrumental leading to the sixth track ‘Rock That Shit’ makes you just wanna ride a Harley into the desert before getting lucky with your woman against a cactus. Yes, a cactus. ‘Let It Go’, ‘Black Smoke’, ‘Warming Up’ and ‘Don’t Tell Me’ are all classic ANVIL riffs and lyrics. The only "ehhh" track on the album is ‘Nanook Of The North’. But do I really care? Nope. The album, for the most part, shows us why we love this band. ANVIL shows they can enjoy their success and deliver album after album on a consistent basis while keeping their fans satisfied. For more information, check out www.facebook.com/anvilmetal, www.spv.de