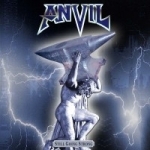 All those of you who are going to complain about an ANVIL review in VOICES now can fuck off! These Canadian masters of intense Metal certainly deserve a lot more recognition than the majority of wannabee-brutal copycats that we have to deal with day by day. I actually get constantly pissed whenever there’s a new killer album out by Lips & the gang, and except for a small and dedicated fanbase (all hail to thee!), nobody really seems to care about the brilliance of these guys. I just don’t get it, because ever since 1982’s alltime classic "Metal On Metal" (we better leave out the still kinda weak debut "Hard’n’Heavy" here) ANVIL have already produced tons of great Metal tunes and never really wimped out or changed their style in order to reach a bigger audience. ANVIL have always just been ANVIL and they already played Speed Metal when the guys from METALLICA were still worshipping their NWOBHM records and the term ‘Speed Metal’ didn’t even exist yet! "Still Going Strong", their eleventh regular studio album (not counting the "Backwaxed" compilation and "Past And Present" live album), is probably their strongest effort for quite some time! Not only in years, but ever since 1983’s legendary "Forged In Fire"! It’s actually even quite close to that monster of an album in many aspects. While some of the last ANVIL records were slightly heavier and almost Thrash influenced, the whole songwriting on this new release is pretty much back to basics again. The crunchy guitar sound is completely over the top and Lips’ unique vocal performance as well as his incredible leads exactly continue on where he left off with the last note of ‘Winged Assassins’ back in those glorious days. Drummer Robb Reiner, who has been an alltime favorite of mine for many many years, not only proves his unbelievable talent once again, he’s without a doubt another big trademark of the unmistakable ANVIL sound and definitely a completely underrated fellow (just check out ‘White Rhino’ for that)! From uptempo material to rather slow tunes ANVIL once again cover the whole spectrum, within the boundaries of their own beautiful little Metal world. I could easily go on praising "Still Going Strong" forever now, but it probably won’t change anything at all (as usual). So, I will simply address this review to all those of you who are still clever enough to seperate good Metal from crappy noise. Essential!