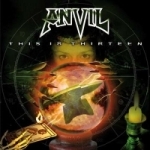 Already the fact that ANVIL re-united with producer legend Chris Tsangarides again (almost 25 years after the band had been using his services on two of their most successful albums "Metal On Metal" and "Forged In Fire") should be reason enough to give this new record a listen. Don’t get me wrong: by this I’m not trying to say that Canada’s most steady Metal act has released weak material ever since (not at all, in fact I totally worship all of their albums in one way or another!), but somehow there’s a certain magic in the air, that’s surrounding those two records, that I can’t really explain… Ok, the songs were definitely killer, but hey – ANVIL wrote a lot more classics in the years to follow as well, so it must have had something to do with Chris’ input as well. And "This Is Thirteen" (the band’s 13th studio album) seems to prove this thesis. The album impressively kicks off with its titletrack in a very heavy, almost doomy ‘Forged In Fire’ kinda way and already leaves me breathless! What a monster of a song! Next up is ‘Bombs Away’, a typical uptempo ANVIL crusher with all the band’s wellknown trademarks: Lips’ unique vocal delivery, his unmistakable guitarwork and the awesome drumming of Robb Reiner (this guy is simply amazing!!). You’re about to experience this again and again throughout the entire record in the best possible ANVIL tradition! For some strange reason song number three, ‘Burning Bridges’, reminds me of ‘Pounding Metal’ by fellow Canadian Metalheads EXCITER… must be the structuring of the song and chorus part, even though this is of course still 100% ANVIL here! I could go on praising each and every new song now, but as that would take me too long, let me just tell you that the band has compiled a solid mixture of material (thirteen tracks in total), that could easily have been released in-between "Metal On Metal" and "Forged In Fire"! A feast for all old school Metalheads in general, ANVIL diehards in particular and to me personally definitely the best ANVIL record in years! Too bad that it’s only available in a limited edition of 1.000 copies at the moment (you can only order it from the band directly), but I still hope that this situation is about to change in the not too distant future. http://my.tbaytel.net/tgallo/anvil/