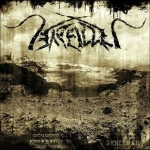 ARALLU from Israel look back on 18 years of band history and have just released their 5th full-length album called “Geniewar”. The presented nine tracks plus IRON MAIDEN cover tune consist of a mixture of Death- and Thrash Metal with obvious influences of their culture in form of oriental sounds and instrumentation. The opener ‘Evil Finest’ for example is a track with oriental instrumentation and an eastern mood spreads around. The guitars remind me a bit of HYPOCRISY during their “The Fourth Dimension” period, mixed with some Thrash tunes and oriental sounds and some careful used bongo drums appear here and there. I have respect for a band from that area to play and live Metal, but the music quickly loses itself in uninspired sounds and mixtures between Death Metal, Thrash Metal and classic Heavy Metal. The mood, the band intended to spread around is nice in general as I always liked ORPHANED LAND and especially their early works but I cannot help myself and must admit that “Geniewar” seems to be uninspired and immature and seems to have been recorded just for the sake of recording another album. Even the cover tune of ‘Powerslave’ seems to be uninspired and does not fit at all in the middle of this album and its concept. The production also sounds more like an demo from the 90s, than a proper full-length. Even self-released albums with smaller budgets can sound better. Again, I have respect for a band from Israel to play Metal but am disappointed with the result as I expected some more and not uninspired songs. More info about the band can be found at the following locations: www.facebook.com/arallu666, www.ravenmetal.com