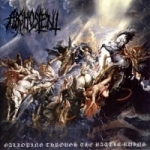 I don’t know if you have read my review of "Incorrigble Bigotry" ARGHOSLENT’s 2002 release, because then you should already know what this band is about. The US horde plays a rousing, driving mixture of raw Death Metal and traditional Heavy Metal à la MAIDEN, NWOBHM, but doesn’t drift into those awful melodic Death regions that we know sufficiently from Scandinavia. "Galloping…" is ARGHOSLENT’s debut CD (originally released in 1998) that now gets reissued on limited vinyl by the wellknown Italian underground label Hellflame. If you do not already own this release be fucking sure to get it now, because in my opinion "Galloping…" is even better than ARGHOSLENT’s Drakkar debut "Incorrigble Bigotry". Numerous killing riffs, raw and aggressive vocals (no scream vocals, as a side not for all those who despise that Melodic Death boredom), technical advanced yet memorable song structures and even a bit of a dirty Punk feeling make ARGHOSLENT’s first album an absolutely valuable release. Especially on black gold "Galloping Through The Battleruins" should enrich every serious Metal collection with the musical starting point of highly talented and individual sounding act. For more information surf to: www.buio-omega.it You can reach ARGHOSLENT personally via the following email address: arghoslent@hotmail.com.