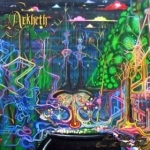 One-man band ARKHETH is something… different. Tyraenos, who plays every instrument along with vocal duties, since 2003, has released three ARKHETH albums. Not a steady flow of continuous work. And it shows as the sound has changed somewhat throughout the past two decades. Pushing the envelope of Black Metal, ARKHETH has summoned forth a full-length of five songs, the shortest being just over six minutes. And throughout each track are twists and turns, somber moments, epic upheavals, and eviscerations of sonic proportions. But does it satisfy? Honestly, “12 Winter Moons Comes The Witches Brew” is somewhat of a head-scratcher. What you think may be typical Black Metal then becomes a mish-mash of different atmospheres, textures, vocal stylings and even horns. Yes, horns. ‘Trismegistus’ starts off with a muddled production with drums mixed way too low. Then, after a while, the guitars squeal and splinter as Tyraenos’ vocals rasp and gurgle in a Black Metal voice harkening back to the rawness of the tape-trading days. The talking in the song is more of a diversion than an addition. And speaking of talking, the vocals in ‘Dark Energy Equilibrium’ sound like someone who’s simply too exhausted to do more than speak the lyrics. The energy sounds sucked dry. And then the horns come in. EMPEROR’s Ihsahn can pull it off on his solo albums. Most other Black Metal bands cannot. And this holds true for this track. I appreciate the effort and desire to shake things up. But do Black Metal fans really want to hear this? The third track ‘Where Nameless Ghouls Weep’ starts off with baying wolves before keyboards and more horns complete the musical sound. The vocals, however, sound like Groovie Mann from the THRILL KILL KULT for some reason. The siren wail of horns and chaotic guitars go in every direction on ‘The Fool Who Persists In His Folly’. There’s even an organ mixed into the sound. And is Tyraenos actually laughing in tune at one point? I’m so confused. Rain and thunder usher in the final track ‘A Place Under the Sun’, a somber song of whispering vocals and a foggy wall of sound. If you want something really out there, then this may just be for you. ARKHETH have actually produced a unique album. And hell, maybe my disorientation is another person’s reward. For more information, check out: www.facebook.com/arkheth, https://tometal.com