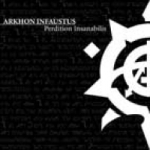 This band has made so much progresses that at first I barely recognized them. I don’t like their two first full lengths at all, but now it is an entirely different story. What ARKHON INFAUSTUS have achieved here confines the domain of the unbelievable and of the more than human. They have reached a new level with this album which could place them at the forefront of the international Death / Black Metal elite. On “Perdition Insanabilis” this French four-piece has chosen the path of hard work (it shows, believe me) and somehow redefined their approach of composing music from scratch. Think of the “new” Norwegian Death Metal practiced by ZYKLON or MYRKSKOG (on their “Deathmachine” album) and you will be not far from what ARKHON INFAUSTUS are about today, for the better to say the least. The musicianship of these guys can be now labelled as purely and simply stellar, and it is well served by a luxury powerful production, the tracks are carefully crafted, with lot of twists to keep the listener’s interest intact throughout the entire duration of the album. The annoying Death and Black voices combination is a little toned down on this, and when used, used properly. The Black Metal overtones are clearly prominent I must add, in a very sophisticated way that reminds me on the Swedish band / project MUTANT. Lyric wise, ARKHON INFAUSTUS seem (I don’t have the lyrics, so I am only guessing from the title of the tracks) to have departed from their rather silly bondage fantasies to accede to a more original way of writing, oriented toward a sort of cosmic dark occultism (don’t quote me on that, but yet I think that titles like ‘Saturn Motion Theology’ or ‘Absurd Omega Revelation’ could sum the overall ambiance of the disc). I don’t think that ARKHON INFAUSTUS are cynics and opportunists who jump on a new trend. The music on this album is the proof that their evolution and maturation are genuine, you can’t fake talent. I am sure they were too enthusiastic and impatient when they begun their career to conveniently channel their considerable abilities then. Now, at last, it is done, and ARKHON INFAUSTUS are here to stay, trust me on that! A phenomenal album by a phenomenal band! Thumbs up!