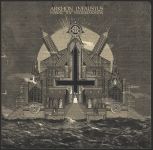 The beast is back, after an eight year hiatus, hidden in a dark cave. Beneath the waves of time, ARKHON INFAUSTUS has returned. It has been 10 years since the last album from the French band, led by DK Deviant, who put out the excellent "Orthodoxyn" in 1997. DK Deviant hasn’t lost his grip for building massive songs. "Passing The Nekromanteion" is a great continuation of the orthodox Black Metal path the band strode onto with "Perdition Insanabilis", where it all became darker and more evil, compared to the all out chaotic attacks the band started out with delivering. The sense of controlled chaos is still hidden beneath the massive evil and dark atmosphere, though the eerieness and mysticism is reigning supreme. It is impressive how the atmosphere is being build up and kept, during the 4 songs and 33 minutes of this album. The guitars are rumbling distorted and dissonant beneath the pummeling bass and drums. The drums slowing down, as the rituals are becoming darker and more somber. The vocals roaring in the background, or completely dissapear, as in the instrumental ‘Corrupted Épignosis’, a track that works really well, and is a rollercoaster of emotions and despair. This release has made me realize how much I’ve actually missed this band, and I’ve been dusting of the older ARKHON INFAUSTUS releases, and have been through them all, with great enjoyment again. And with a release like "Passing The Nekromanteion" I am looking very much forward to future outputs from ARKHON INFAUSTUS! Enter the whirlwind journey at www.facebook.com/arkhoninfaustus666, label contact: www.facebook.com/ladloproductions