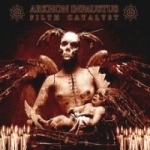 I did a lukewarm review of this French outfit first effort and I am afraid it goes worse with this one. I don’t know what happened exactly in the life of the band since “Hell Injection”, except that they are now a four piece and that they had the drummer of the awful CONQUEROR within their ranks for quite some time. I saw them live thrice, and each time I was somewhat disappointed by their performance. Well, as soon as the music flows out the speakers, it is obvious “Filth Catalyst” is plagued by a wrong production, very compressed and favoring low tone drones, with vocals totally buried in the mix. I heard through the grapevines that the musicians wanted the sound just like that, if it is true it is not a mark of good taste. Instead of actually listen to some music (how extreme the music can be) we are facing a barrage of noise very similar to what bands like CONQUEROR and now REVENGE are fond of. I know the ARKHON INFAUSTUS guys will take this comparison as a compliment, but be sure it is not, coming from me. You simply can’t build a solid track with a single idea, and a whole album with the same track repeated eight times. Maybe it is fun to play, I don’t know, but it is certainly not an exciting listening experience, it may even become painful. It is strange to experiment an attack of boredom while listening to such a brutal release, and you know what, I even felt an urgent need to sleep. The prospect of listening to this album another time (to maybe catch some elements of interest I could have missed in the first place) was so bleak that I humbly beg the band and our readers to pardon me for having abandoned this idea very fast. While being obsessed to keep the right attitude (whatever such an attitude could be), ARKHON INFAUSTUS deliver a very artificial release, devoid of any touch of class. Avoid this one and buy the latest, fantastic EXMORTEM release instead on the same label to know how real brutality may sound.