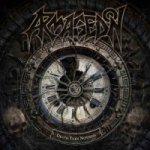 ARMAGEDON’s 1991 demo “Dead Condemnation” was one of my favourite demos back in the early nineties and I wondered why this band didn’t succeed like e. g. their country mates of VADER or BEHEMOTH. In these early years, when BEHEMOTH were founded as a Black Metal band ARMAGEDON already convinced the fans and critics with the above mentioned demotape which had everything a professional demo needs to have: a printed cover and booklet, a fantastic sound and above all 6 great songs of Death Metal with slight MORBID ANGEL influences. But who wasn’t influenced by them at these days? ARMAGEDON were from my point of view one of the best Polish Death Metal bands and apparently tried to take off with their debut album “Invincible Circle” in 1993 through Carnage Records. If I remember correct this album was supposed to be released through Peaceville Records, but time showed that it was only released on tape via Polish Carnage Records. “Invincible Circle” was a great album, but didn’t help the band to gain the ground they deserved and therefore it was in the hands of other Polish bands to prove that Death Metal from Poland has much to offer. You know the names. Now, 16 years later we write the year 2009 and ARMAGEDON are back with their 2nd official album release called “Death Then Nothing” and with almost tears in my eyes and shivering fingers I put this CD in my player and heard the Death Metal I remember from those early days. Fuck, they didn’t change their style that much, but improved when talking about songwriting and song quality. This CD is everything else than an ordinary “comeback” recording from an old band, this is a CD which you expect as a follow up to their previous recordings. Damn, I expected a good album but not such a killer recording. To be honest, if ARMAGEDON were as active as BEHEMOTH and VADER during the years I’m sure that they would stand in the same line as them. “Death Then Nothing” is the perfect example of a modern Death Metal recording with an old school approach. Worth any support. Check out www.armagedon.net.pl or www.mystic.pl to order this great CD. Unfortunately both pages are only available in Polish, but if you write them an email you will get an answer immediately. I hope this CD will be available in many mailorder-catalogues as it really deserves your attention. (Update: The album is available from May 17, 2010 in Europe. You will find a list of the distributors on ARMAGEDON’s myspace site www.myspace.com/armagedonofficial).