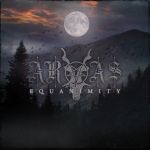 ARVAS from Norway were unknown to me so far even though their history goes back to 1993 (active as ÖRTH before) and have already released four full-length albums. “Equanimity”, album number five, starts with a well-done intro ‘Andante Noir’, with medieval spoken passages and whispers and well done keyboards before. ‘Thoughts In Despair’ is a mixture of grim Norwegian Black Metal but combined with classic Heavy Metal tunes. No chance to call it melodic as the fundament is very grim Black Metal with grim caws and a rough and blistering atmosphere. As ARVAS is just a one-man army currently, it is more than astonishing what he created here. ‘Wastelands’ has a rough Thrash Metal edge but still mastermind V-Rex does not forget about the melody which is pretty fine and the everlasting blast-beats are pretty thick and he varies his vocals here as well. ‘Perception And Visions’ continues more dynamic and more grim, partly with an industrial touch but also incorporating Swedish styled melodic tunes and especially the audible bass-lines are pretty cool and the double-bass really kicks ass here. ‘Cursed By The Trident’ continues to cross the border to Sweden even though it also has an industrial touch while ‘Carve’ is a pretty 70s influenced and a catchy Black’n’Roll track. ‘My Devil’ starts with delayed MAIDEN-esque guitars before SLAYER vibes start the inferno and turn to classic Black Metal again with some SLAYER interludes. ‘The Horned One’ starts thrashy but still calm before also turning into a rough Black Metal track with a freezing melody in the back and V-Rex manages to spread the freezing moon here with his grim caws again. ‘Times Gone’ is the last own and another classic Black Metal track and maybe the darkest one on the album. The album gets closed with a cover o CORONER’s ‘Masked Jackal’, a pretty cool blackend version of the original. For Black Metal lunatics “Equanimity” might be interesting to check as it really offers some good tunes and is a diverting album in the young Metal year. For more info, please check one of the following sources: www.facebook.com/arvasblackmetal, www.facebook.com/satanicartmedia