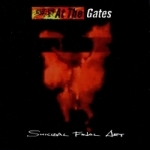 Hooray, finally there’s a new album of the godfathers of the so-called Gothenburg-style AT THE fuckin’ GATES. Unfortunately it’s only a kind of ‘best of’ compilation, but that’s already better than nothing, because this innovative, outstanding and legendary cult act really deserves such kind of tribute and it’s already more than five years gone since the swansong of Tompa and his crew. Besides god’s gifts like ‘Kingdom Gone’, ‘Raped By The Light Of Christ’ or ‘The Swarm’ this compilation also includes two video clips of ‘Terminal Spirit Disease’ and ‘The Burning Darkness’ as well as two demo versions of ‘Ever Opening Flower’ and ‘The Architects’ taken from the absolutely underrated second masterpiece “With Fear I Kiss The Burning Darkness”. But being a huge fan of this unique outfit I have to criticize that there are only two tracks from their best album ever “Slaughter Of The Soul” (which is probably caused by some legal problems with Earache Rec.) and I really miss a couple of very important AT THE GATES vintage classics. For example, there’s not only one single track taken from the legendary debut MLP “Gardens Of Grief”, although a song like ‘All Life Ends’ belongs to the all-time classics of AT THE GATES. Also I miss some rare tracks like the “Slaughter Of The Soul” bonus tracks ‘Dying’ and ‘Legion’ (a cover song of SLAUGHTER LORD) as well a the cover version of SLAYER’s ‘Captor Of Sin’ released on Black Sun’s “Slatanic Slaughter” tribute album. But all in all that doesn’t matter, so buy this album, listen to it and bow down reverently on your knees and pray for a resurrection of this most original band ever from Sweden.