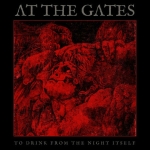 AT THE GATES
To Drink From The Night Itself
(Century Media Records)
44:47min

Gothenburg’s AT THE GATES surprised us in 2014 with their first new full-length ("At War With Reality") in two decades. It was as if the band had never split to start with. Now, just four years later, they deliver another set of masterful songs with "To Drink From The Night Itself". Lindberg and company simply cannot disappoint. They seem as in touch with the Metal scene now as they did back in 1992. With their all-over-the-place riffing along with melodic atmosphere mixed in, the band has created another Metal epic. ‘Der Widerstand’, with its acoustic guitars and empiric classical overture, leads the way into ‘To Drink From The Night Itself’, an in-your-face anthem that sounds like DARK TRANQUILLITY in Hell. There’s no better way to begin the album. Everything we love about the band is swirling around inside this track. ‘A Stare Bound In Stone’ rides into the night, galloping on its fiery steed at breakneck speeds. If anyone asked what the Gothenburg ‘sound’ is, play them ‘Palace Of Lepers’. Heck, play them almost any song on this album. AT THE GATES created this sound. ‘Daggers Of Black Haze’ is a piano-driven opening that becomes a mid-tempo track of relaxed guitars and lumbering drumming. Lindberg’s voice over the music of Larsson (guitars), Stålhammar (guitars), Björler (bass) and Erlandsson (drums) is sheer bliss. It’s like having an orgasm with one thousand nymphs in the Garden of Eden. ‘The Chasm’ takes it up a notch sure to get any Metalheads on their feet and smashing into the nearest body of useless flesh. ‘The Nameless Sleep’ is slightly more melodic, as ‘The Colours Of The Beast’ sounds like a murky, chugging, thick mass of decay. ‘A Labyrinth Of Tombs’, ‘Seas Of Starvation’ and ‘In Death They Shall Burn’ consistently deliver throughout as final track The Mirror Black’ swelters, sways and staggers through a slowed down masterpiece of a song. For a band that claimed they were done with new material up until four years ago, they sure as hell keep fucking us in every orifice with their angry, beautiful, chaotic form of Metal. Hail to the mighty AT THE GATES. Screw the naysayers. For more information, check out www.facebook.com/atthegatesofficial, www.centurymedia.com