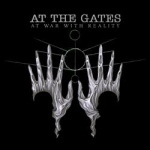 AT THE GATES
At War With Reality
(Century Media Records)
44:16min

The return… Like if time was nothing… Into oblivion… AT THE GATES was formed from the ashes of GROTESQUE and went on soon to release a demo / EP, with “Gardens Of Grief” and quite soon their debut album “The Red In The Sky Is Ours”, heralded by the more brutal Death Metal fans as their best. A novelty was the inclusion of a violin player, something that lasted just that album and was not actually that much of a part of their sound at all. Then they released “With Fear I Kiss The Burning Darkness” which another big part of their fans consider their best, with a more twisted, chaotic style of Death Metal, and the trademark vocals of Tompa which were a love / hate affair. Enter the next effort with “Terminal Spirit Disease” which settled their style and that went on to be immortalized with “Slaughter Of The Soul” an album that it seems die hard fans of the band are neglecting due to it being incredibly popular and gathered hordes of new fans to the band. An album with such importance, that it founded the bases for many other bands. AT THE GATES style since "Terminal…" has not changed that much. Yes, the main core is Death Metal, a bit melodic if you will. There is also a huge Thrash Metal influence, and at least I will say DARK ANGEL in their deadliest is a big major influence in their sound, besides a myriad of other bands like BATHORY, JUDAS PRIEST, KREATOR and yes, even PANTERA had a touch in the AT THE GATES sound. Incredibly, after this album the band due to strange circumstances decided to stop. The Bjorler twins decided to go on with the more Thrash Metal based band THE HAUNTED (which has always suffered from terrible Hardcore sounding vocalists in my view) but with a similar aura and with some success. Vocalist Tompa (Tomas Lindberg) went on in various projects including many more Hardcore orientated and a strange stand in with THE CROWN. Adrian Erlandsson the drummer was also active with CRADLE OF FILTH amongst many others. Even Martin Larsson, the other guitar player went on to some more low profile projects. Suddenly, “Slaughter Of The Soul” went on to have a bigger following than ever, some 10 years after it was released. Countless bands were influenced by that record although in a more Hardcore jump-jump American styled Metal. So, it was inevitable for a reunion to come up, as the players were active in one way or the other. Some live shows started and even if there were declarations that no new music was going to be created, that is a statement harder to believe than there will be no more sun. Once the chemistry on the live front was proven again, on to create. All those years after their last studio album, almost 20, gave birth to this new opus. And for once, I can say that this reunion, is amongst the very few that were brought back from the dead with success. As much as everyone was expecting “Slaughter Of The Soul” pt. II, I was one that was despising the idea. Do not get me wrong, I like that album, but done by the same band again was not my idea. Instead, this new one, sounds more like a mixture of “With Fear…” and yes, some “Slaughter…” parts, yet this is 100% AT THE GATES. Tompa’s vocals are deadlier than ever, and the musicians are also in top form. The writing abilities are there, and they were wise enough not to copy themselves, yet retaining their style. There is quite a very good balance between speeds in the songs, and for once, this is less melodic than “Slaughter…” in a move few were expecting. And the production values are very good, yet not sounding over produced or plastic. Those juicy riffs with the aura of darkness and despair are there. This proves time is just a number, not a reason. AT THE GATES has done a return album many bands wishes for their highest point in their career, and it goes along so well it is scary not to believe some sort of dark powers and deadly sacrifices were to be done to superior forces to release something like this. And yes, that cover art, the titles of the songs, yes, for sure it is AT THE GATES. And what a fantastic intro they used although it is in Spanish, the message is clear. One of the top release for this year, for sure. www.atthegates.se, www.facebook.com/atthegatesofficial, www.centurymedia.com