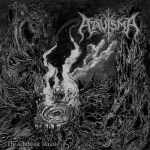 "The Chthonic Rituals" is the last offering by French Death / Doom maniacs ATAVISMA, released last month by the Spanish label Memento Mori. I remember listening to their impressive debut demo "Where Wolves Once Dwelled", so I expected some great stuff and it is what you can find here. This full-length kicks off with a short kind of drum solo intro which gives way to ‘Extraneous Abysmal Knowledge’, a great brutal track charged with some blast beats from the very first seconds. The music is sometimes slow, sometimes fast, so you have a varied handful of tempos, guitar resources and melodies. L., the man behind the vocals, offers some awesome deep growls. A great opening track! The next song, entitled ‘Sacrifice Unto Babalon’, is very consistent to the previous one, since it is similar in terms of soundscapes and variations (I love the way the drum snare sounds). ATAVISMA slow down a bit with the atmospheric ‘Monoliths’, the fifth track here. The next ones are ‘Ashen Ascetic’ and ‘Amid The Ruins’. ‘A Subterranean Life’, the last track, is a monster of composition that is almost 12 minutes long. It’s mainly a mid-tempo song filled with some vicious cavernous riffs, guitar solos and double kicks here and there. The last minutes sound like a monotonous endless march straight to extinction… great dark atmosphere! When I hear this stuff, acts like SYMPTOM, HOODED MENACE, INCANTATION, FUNEBRARUM, RIPPIKOULU come to mind. Their sound is closer to the Swedish scene than the U.S. or Finnish one. To me, this is one of the greatest releases of the current year, a must for every fan into Death and Doom genres. Keep yourself tuned about their steps at www.facebook.com/atavisma.band and give them your support by getting a copy at www.memento-mori.es