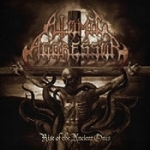 ATOMIC AGGRESSOR were one of the South American multitude in the 80s, standing proudly alongside DEATH YELL and PENTAGRAM. This recording contains all of their demo tracks starting from their humble origins, to 1991. Fans who know their Death and Thrash Metal should know what to expect from bands of South America in the late 80s: fast, gritty, murky, sometimes muted, riff salads of the most blasphemous order, and raspy, choked-with-the-dust-of-centuries vocals. For die-hard fans, there exists a vinyl version also released by Hells Headbangers, but in extremely limited quantities. The LP is almost as scarce as the original demos are! Its a worthy purchase, no matter what the format is, for this style of music is almost like a common ancestor for Death Metal, from which many styles, through speciation, have sprouted. www.myspace.com/atomicaggressor