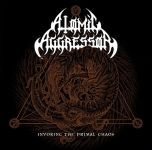 ATOMIC AGGRESSOR are a part of the history of Chilean Death Metal, having existed between the years of 1985 to 1992 and releasing three demos in that period. In 2007 the band reformed, with new guitarist Julio Bórquez, who also plays in the magnificent CAPILLA ARDIENTE. Since their rebirth, they have released a demo compilation, a live album, a couple of splits and, finally, a full length in 2014. Five years later they came back to release material, in the form of this brutal EP with four tracks of lovecraftian horror and dread. Four savage songs of old school Death Metal with the level of aggression of bands like INCANTATION, MORTEM, NECROPHOBIC or SADISTIC INTENT, with flawless unpolished production and suitably lethal technique. The drumming is fast and enraged, the stringwork is heavy, distorted and precise, including eccentric soloing that evokes the voids of the great old ones, and the vocals are bestial growlings from the pit. We can say this Chilean Death machine has reached the present in great shape. The EP feels like an interlude; by the end of the lengthier ‘Archetypal Balance’ you find yourself expecting more devastation. So I hope a sophomore full-length to be heading our way eventually. ATOMIC AGGRESSOR feel inspired and fresh, even if firmly rooted in the strength of the original times. Death Metal is alive and well, and so is the always impressive Chilean Metal scene. Learn more about this powerful release in www.facebook.com/atomicaggressor, www.facebook.com/melipullirecords