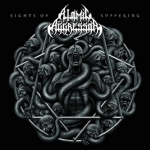 In a perfect world (where only such factors as talent, honesty and creativity would have an impact on a band’s success, while such factors as money, geographical location and connections would be irrelevant), SEPULTURA would not be the the only really big and successful extreme Metal band from the whole South American continent. In that perfect world, such bands as the Peruvian MORTEM and the Chilean ATOMIC AGGRESSOR would be mentioned in the same sentence with the likes of MORBID ANGEL, OBITUARY and DEATH rather often. Not only in the context of bands that have musical similarities, but also because the South American bands would have gotten the recognition that they rightfully deserve and would be as big as the Florida based giants. In that perfect world, ATOMIC AGGRESSOR would have released their debut album in 1991 or 1992 and that album would be a must have item in every Death Metal fan’s collection. In reality, ATOMIC AGGRESSOR faced enough troubles in the late 80s and early 90s to be unable to use the opportunity that they were offered by Peaceville and split up, after having released only 2 demos, which stood the test of time and lead to a surprisingly strong comeback in 2008. The 2008 demo that was featured on the "Rise Of The Ancient Ones" compilation sounded rather convincing and now – ATOMIC AGGRESSOR’s debut full length album is available. First of all, the band didn’t go the easy way and didn’t record any of the already familiar to many demo tracks. The album consists of 10 brand new songs (the vinyl version also has an 11th bonus track), that don’t go astray from the path that ATOMIC AGGRESSOR have been treading ever since the late 80s. Expect massive Death / Thrash à la MORBID ANGEL, with many riffs that will stick in your head after a bunch of listens, as well as damn chaotic whirlwind like solos. Even the drums sound quite organic and the bass drum sounds less annoying than it did on the 1991 and 2008 demos. So ATOMIC AGGRESSOR’s music still sounds quite haunted, possessed and quite mystical. The dynamic and intelligent songwriting of this band can’t be unnoticed. It’s a good comeback album, and the only other band that yours truly would say the same thing about is ATOMIC AGGRESSOR’s land-mates PENTAGRAM CHILE’s "The Malefice", that came out last year. In both cases, these "released 20 something years too late" albums are way more solid examples of well written and executed Metal than what the majority of old school sounding bands that were formed in the 2000s have to offer. The problem is that if you set the standards higher and compare an album like "Sights Of Suffering" to a really old late 80s, early 90s classic, then it would feel strange to put a record like this on the same shelf with the oldies. To sum it up, "Sights Of Suffering" is good, but not amazing. The 2 tracks that are available at Hells Headbangers’ bandcamp page will give you an idea of what to expect. The rest depends on your level of selectivity, so better give these 2 tracks a try to find out whether this album is worth your money or not. For all additional band information and order details check out the following sites: www.facebook.com/atomicaggressor, www.reverbnation.com/atomicaggressor, www.hellsheadbangers.com