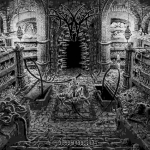 It was about a year ago that ATOMWINTER crossed my path for the first time. Without having heard a single note of them, I bought their second album “Iron Flesh” just because I liked the band’s name and the rather primitive cover art looked interesting to me. And I wasn’t disappointed for sure when I listened to the album on my stereo. ATOMWINTER learned all the lessons in old school Death Metal and they learned them very well. Their ASPHYX based Metal of Death was spiced with ingredients of GRAVE, BOLT THROWER and other European grand masters. The result was a very fine album that not only still runs on my turntable but made me very keen on new stuff as well. And that stuff is here with the newest ATOMWINTER album “Catacombs”. Again the German four piece pleased my needs completely with their stuff, for that new album walks the same direction as its predecessor, but on an improved level. The sound is a bit more intense and the band itself progressed in their skills, both in playing and writing. Of course ATOMWINTER haven’t changed their style, so don’t expect anything you never heard before. But you’ll get a very fine Death Metal album in classical style, with an always present influence of the mighty ASPHYX. Their impact can’t be overheard in the opening title track or ‘Dark Messiah’, that was spiced with fine BOLT THROWEResque grooves in addition. But that’s not the only style ATOMWINTER are presenting here. Just listen to ‘Ancient Rites’ with its vibes that remind of especially older GRAVE, or their faster stuff like ‘Morbid Lies’. My personal highlights of “Catacombs” can be found in the second half of the album. I just love the mid tempo grooves in ‘Gathering Of The Undead’, and the fantastically rancid ‘Necromancer’ could have been a fine opener as well. With ‘Funeral Of Flesh’, ATOMWNTER saved the best for last! This slightly epic Doom steam hammer finishes the album with a lot of style, as the ultimate peak of a damn good Death Metal album. Be sure to check ATOMWINTER at www.facebook.com/atomwinter (do not forget to give them a like) and visit their new label as well: www.trollzorn.de. Just as “Iron Flesh”, “Catacombs” will be out on vinyl as well, just to keep all like-minded maniacs informed.