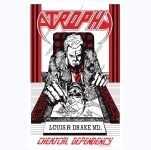 Formed way back in 1987 in the sunny Arizona, ATROPHY was a quite fun and good Speed / Thrash Metal band that went on to release two good albums before disappearing into obscurity, and then some 30 years later to re-appear again. This is their demo that secured them a deal with Roadrunner Records back in the day. If I am not wrong all of these songs are also available in their debut album. Their style is similar to that of early METALLICA, early ANTHRAX with tiny bits of more heavier Thrash like SLAYER and also not far away in style to their neighbours in SACRED REICH. The vocals here drift away from the melodic style to use a gruffer style to say so, but not getting lower that that. In a way it reminds me of the very first DEFIANCE album. The band is based on very fast riffs with a slight sense of melody and there is more than some subtle humour and also some social criticism in their lyrics. There is also a small yet noticeable Hardcore and Punk influence in their music. The demo contains as bonus songs some live recordings, that although decent, really add not that much in terms of new music except for one song. Although in perspective ATROPHY was a good band, in my ears they were never exactly doing something that good or different to have a better status than the one they reached. It is not in the league of, let’s say MORBID SAINT, but a few songs like ‘Preacher, Preacher’ are quite good . It seems that they are also playing live again with most of the original members so this is good time to catch this demo recordings with a bit more rawer edge than their album counterpart. www.facebook.com/atrophyofficial, www.vicrecords.com