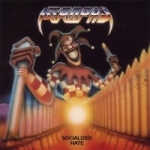 It’s quite easy to say what makes an album a good album. Good songs, atmosphere, variety, good production, great guitar riffs, a good vocalist, maybe musical skills. But what makes it a successful album? To be honest I don’t know it. Arizona based Thrash Metal band ATROPHY is a fine example of a totally underrated band. This band released two great albums, "Socialized Hate" (in 1988) and "Violent By Nature" (in 1990), containing everything I mentioned before but definitely can’t be called commercial successful or even well known. After just two releases they disappeared into the unknown. ATROPHY played a style rather similar to what more popular bands such as SACRED REICH, FORBIDDEN, NUCLEAR ASSAULT and DEATH ANGEL did back then. Although this is a second generation Thrash band, ATROPHY was not a copycat. Okay, they were not super original but they had their own note and they composed some damned cool songs. Quality-wise they played the same league such as the aforementioned bands but unfortunately never got the attention they deserved. "Socialized Hate" and "Violent By Nature" are full of neckbreaking rhythms, driving drums and intoxicating guitar riffs. Hell-yeah, I really have to mention the great guitar work. That’s what Thrash Metal is all about. The fucking guitar riffs which make you wanna bang your head off, isn’t it? Both albums have a proper and powerful production and asskicking vocals, Brian Zimmerman has that kinda voice a Thrash vocalist should have. Man, I really love his aggressive and thunderous barking. On the debut the bands presented its more aggressive, straight forward side and on the second album there is the more varied and more song oriented, memorable, yet still aggressive, side. In my humble opinion "Violent By Nature" is the better of two awesome albums cause it’s a bit more varied and it contains a couple of first class Thrash hymns such as the title track, the opener ‘Puppies And Friends’ and the incredible ‘In Their Eyes’ amongst many others. I read somewhere that some of the musicians tried to resurrect the band in the late 90s with a new vocalist but I don’t know if they really did. Anyway, both re-releases come just the way they were original released. That means without any bonus material, there are just different booklets with the band discography listed and they were remastered. I really like those re-releases, this is a good thing, so you don’t need to waste your hard-earned money on ebay buying those long-time sold out originals. Okay, enough is said, if you appreciate good old quality Thrash and don’t own the original Roadrunner / Roadracer CDs you definitely have to put both re-releases on your shopping list. ATROPHY is a must have!!! Label website: www.displeasedrecords.com.