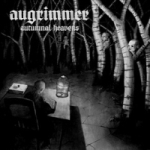 The Northern Silence policy to introduce a new band with a limited MCD instead of a full album seems the right decision keeping in mind that the music industry is releasing hundreds of albums every week. So open the book, absorb the light and invite AUGRIMMER into your own dark world. If you never heard of this German band don’t be ashamed, the project was founded by Nord over 10 years ago and the first years had been solely used to collect their musical basis ideas. But after several years Nord decided to search for adequate musicians to record their first demo. The limited MCD "Autumnal Heavens" is finally the first official AUGRIMMER release and Northern Silence signed definitely another band with great potential. The three songs plus Intro are (mid tempo) Black Metal with a certain touch of avantgarde and especially the title track shows the true face of the band. Nord used the first years very well and ‘Autumnal Heavens’ is a dark song with great melody plus small details which had been perfectly incorporated into the song structure (fading guitars), details which makes it very interesting to listen to the song over and over again. The following two tracks are somehow a window into darker AUGRIMMER times; the songs are concentrating more on the dark Black Metal core and seem in some way like older compositions. But if the band is in the position to capture the essence of this release we can expect an impressing debut – maybe not too far away from the debut of their label mates KERBENOK (even if the musical approach is slightly different). www.augrimmer.de, www.northern-silence.de