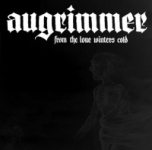 Every dark cloud on the far horizon has the potential to become an enormous storm but sometimes a cloud just stays a cloud. The introduction to the official AUGRIMMER debut is maybe a little metaphoric but if I remember my enthusiasm after their last MCD (“Autumnal Heavens” released early this year – see also the Voices review section) the story finds its suitable conclusion. I was really looking forward to this release but “From The Lone Winters Cold” is honestly speaking a huge disappointment. I can’t trace any fresh ideas, the German band is travelling between the Norwegian and Swedish Black Metal scene of the late 90s – meaning DARKTHRONE vs. (early) SETHERIAL – but without offering anything essential. The calm moments / parts are throughout the album nearly identical; the same must be said about the guitar solos, the advantgarde touch (of their former release) is completely gone and I really start wondering if we are talking about the same band. Maybe one reason could be the use of old band material but why did they enter the studio to record their debut if they are lacking of suitable material – this release is like one of above mentioned dark clouds, they are just passing by without any chance to become the mother of all storms. www.augrimmer.de, www.northern-silence.de, www.myspace.com/augrimmer