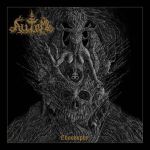 AUTOMB is a USBM outfit. Their debut album “Esoterica” came out in 2018 and “Chaosophy” is their sophomore album. First off, I was intrigued by their front woman Danielle. Her vocals are more of a growl than the usual high pitched shriek associated with this sub genre, which was a very welcomed detail. She is also the bass and keyboard player. Completing the line-up we have drummer Scott and guitarist Sergei. Now on to the music. I kinda liked how the keyboards are used sparingly and in the right places. Personally, I don’t like over saturation of keys in Black Metal and there are lots of bands nowadays that use them to try and create some ambience; most of the times, it doesn’t work. At least not for me. The production is not exactly what you would think coming from a Black Metal band. The drums are really deep sounding and a little sterile (I guess due to the use of triggers or sound replacement) but the performance is interesting and varied. I really liked Scott’s use of the cymbals in certain parts. Danielle’s bass guitar is present although it is always following the guitar riffs. As of guitars, they are not as ear-piercing as in your regular Black Metal band. AUTOMB went for a different and somewhat original sound and they adapted it to their style. The mix is rounded on the top. The drums are a little loud for my taste and the guitar tone is almost devoid of mids (middle frequencies). The vocals are perfectly placed along the music. And I think the mastering is somewhat compressed and it lacks dynamics. They may have gone exactly for this but keeping the attack level on 10 all the time may be a little tiring along the 40 minutes that this album clocks at. The songs are well structured and they have some really good riffs that range between tremolo picking and palm muted parts. Sergei adds flawless tapping and melody in his leads, which contrast with the density of the music. That I will always encourage, since those details add to a song when used intelligently. I also found really heavy and slow parts, bordering on Doom Metal, which is another side of this band that I think they should develop more in their writing. Overall, “Chaosophy” is a good and solid USBM album with a “Death Metal attitude” so to speak. It has everything you would expect from the style and then some. The band can be contacted here: www.facebook.com/autombmetal. And you can get “Chaosophy” from their label here: www.witchinghour.pl