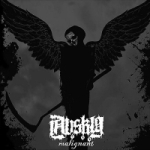 Nah… I don’t think so. Because, this is not “easily the most dangerous-sounding Black Metal bands in ages”. First off, this is one band, not one bands. But who am I to judge grammar mistakes, since they are more regular in my writing than in Moribund’s information-propaganda on the backcovers of their promos. The point is however not the grammar mistake, but rather the statement itself. This is definitely not the most dangerous-sounding Black Metal band in ages. In fact, it’s not enough to produce the album making it sound closer to “Under A Funeral Moon” instead of let’s say “DeathCult Armageddon” (respectively DarkThrone and Dimmu Borgir). You have to go below Mayhem and their “Ordo Ad Chao”, which is the most dangerous-sounding Black Metal album ever! It scares me, simply put. I would rather say that “Avsky” does sound disgusting (avsky means disgust) and the obvious DarkthRone and Celtic Frost influences add to the dirt. In fact, this album is not original at all. You’ve heard the sound before. While listening to the album for the 15th time, I feel that I’ve heard these songs previously done by other bands. Still, and this is the fascinating part for “Malingant”, I am not bored at all. I suspect that it is the horrendous vocals that do the difference. Vocalist TO probably does his vocals on the border of his capacity. I feel like he’s about to loose the strength in his voice all the time. They’re ugly and they’re definitely done with conviction. Compared to their debut, the songs on “Malignant” are longer and in my opinion better. The midpaced approach suits the ugliness of Avsky’s music, and the atmosphere benefits from the mid-tempo. When they speed up, like in ‘Like Poison’, I feel that they’re just doing the standard Black Metal galloping that we know from thousand other bands. But even in this track, they make space for a great break after ca. two and a half minutes. Great. Avsky’s “Malignant” is perhaps not up to par with the top 5 of all Black Metal releases, but if they continue their development, making the music even better and the sound clearer yet more dangerous (just listen to the latest Leviathan, and you’re there), I’m confident Avsky will release a beautiful album… as in Black Metal beauty, that is. The latter does not have anything to do with melodic, symphonic, epic Black Metal, but rather ugly, disgusting, filthy music that contradicts the conformity of most people’s daily life! www.avsky.tk, www.moribundcult.com