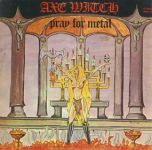 Any reader of these pages knows that Sweden was one of the epicentres of the Death Metal wave in the early 1990s. But there was also some Heavy Metal in Sweden before that. And I don’t talk about names like BATHORY and CANDLEMASS here. It was already in the early 1980s that classic Metal bands like 220 VOLT, TORCH or HEAVY LOAD were around and released music that always flew under the radar of the worldwide Metal community – mostly with a certain justice, in my humble opinion. Swedish Heavy Metal of the early days was mainly solid songwriting and solid musicianship, but it was not really spectacular or even revolutionary. And this goes especially for the first AXEWITCH EP, a band out of Linköping in Östergötland, recorded prior to their three full length albums. The four songs on “Pray For Metal” probably were pretty nice when they came out in 1982, but there was more powerful, more classy Heavy Metal around back in those days already. It was not the ‘Heavy Revolution’ one of the songs promised but somewhere between early ACCEPT (pre ”Breaker”) and 1970s JUDAS PRIEST. It’s only the final, a little more fierce ‘Death Angel’ that blew up at least a little bit of dust. Now, forty years later, this EP saw its third re-release, this time via Hooked On Metal Records. I can’t help but doubt if this is a really necessary release, as the songs really sound outdated and haven’t passed the test of time (and the artwork must have been contender for “album cover of the year” back then already – Frank). At least this new edition of “Pray For Metal” comes along with two extra original songs from a demo AXEWITCH put out also in 1982. And these two songs (that were also used for regional compilation albums) are definitely more interesting. The powerful band anthem ‘Axewitch’ has a distinct touch of JUDAS PRIEST and really knows how to rock. But the ultimate highlight of the whole release is ‘Nightmare’, a really heavy and doomy song with a vibe of 1970s Heavy Rock that still sounds absolutely great. Despite these two songs being the only reasons to get this release I can state that it’s just a little bonus compared to the two prior re-releases of “Pray For Metal” that featured ten more demo and live songs. Among them was the missing third track of the 1982 demo, a cover of the classic JUDAS PRIEST tune ‘Beyond The Realms Of Death’, for instance. So this edition of the EP I’m talking (errr… writing) about right now is really a no-frills edition. In case you’re interested in really old fashioned Heavy Metal and don’t mind or even love it if it sounds outdated, visit either the band, which is active again, at www.facebook.com/axewitch, or check the label responsible: www.facebook.com/hooked-on-metal-records-102213271304559